In March of 2003, shortly after Mountain Goats released “Tallahassee,” we had a chance to interview John Darnielle about music, Florida, cannibalism, and more.

IndieDisco was lucky to catch up with John Darnielle of the Mountain Goats, who obligingly fit us in while on tour in Europe. John filled us in on his new release Tallahassee, songwriting, cannibalism, and more. You can still check out the Mountain Goats live through April, including a date in Tallahassee, FL on April 8! Enjoy.

IndieDisco: Is it fair to describe Talahassee as an ambient dub record?

John Darnielle: Perhaps not fair to do so. Nevertheless I must persist in calling “Tallahassee” my most ambient dub effort to date.

ID: What did you want to be when you grew up? When did you realize that music was calling you?

JD: The first thing I remember wanting to be was a writer. My mother recalls me singing a song that went “I’m just a sailor, but a very small one” when I was about three, but as there are no known recordings of this song we can’t verify the story.

As to music — I’ve been pretty obsessive about records for as long as I can remember; I had my own little record player when I was small and I’d spend hours examining the labels, playing the records over and over again, wondering how they got the music in the grooves, etc. I started writing lyrics at a point when poetry didn’t seem direct enough to me.

ID: What sorts of people did you look up to or admire?

JD: Always writers: C.S. Lewis, Thomas Rockwell (this is when I was young), Ursuala K. Leguin. Also Muhammad Ali, who was the only athlete about whom I cared at all when I was young.

ID: Any fond recollections of your first guitar?

JD: I never really learned how to play my first guitar! But the first one I bought when I started writing Mountain Goats songs was a Kima 3/4-size which I still have, & I’m quite fond of it: it endured having heavy-gauge strings wound onto it when it probably would have preferred nylon.

ID: How did Mountain Goats get its start?

JD: See above: I had these poems I wanted to get across, and I found that if I made the language more direct and set them to simple melodies, people seemed to respond to them. I started showing up at open-mic night at the college I was attending, and the people there were really supportive & enthusiastic, and it sort of went from there.

ID: Your earliest releases on Shrimper were masterpieces of DIY, and the latest disc comes with tri-folding cardboard photo imagery and a folding book. How have things changed since the Shrimper days? Could Talahassee have come out on a cassette on Shrimper, or did it need more?

Tallahassee was conceived of as a big-bells-and-whistles record. What’s changed? Just my obsession with one-take recording: which I still love. But the idea behind Tallahassee was to give the characters space to breathe. As it turns out, they’re only interested in breathing air which they themselves have intentionally poisoned. But I wanted to give them a chance. These people don’t know what to do when they get a chance, though, besides squander it.

ID: What does cannibalism mean to you?

JD: I love this question! Sooner or later we all have to answer this question. When I think about cannibalism (and its mirror-side: scavenger animals) I think about imbalance of power in relationships. Once the scales get tipped, somebody’s gonna get eaten, or that’s my feeling anyhow.

ID: Are you personally as doomy as your latest record?

JD: Heavens no! I am almost irrepressibly chipper. Though I suppose if I lived under a repressive regime that would change.

ID: How’s the tour going? Has Europe been good to you?

JD: Tour is pretty crazy right now – too much going on! Very show-up-say-hello-wave-goodbye! The shows have been great though — Manchester lots of fun, Edinburgh great as always, London a total blast, Nottingham very cool.

ID: What is a Mountain Goats record?

JD: Well – a record I made, I guess. Unless it’s an Extra Glenns record. 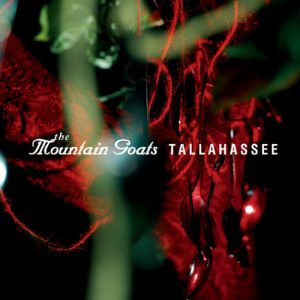 ID: To me, the newest disc Tallahassee has a desperate feel similar to Palace’s Gulf Shores or maybe the poetry of Charles Bukowski. What is it about Florida?

JD: Don’t know! I think it has something to do with how far away from anywhere else it is, and also with the freakish weather that extreme southern points on a map seem to have — in the case of Florida, warmth & moisture enough to support all kinds of weird & beautiful forms of vegetation.

ID: I’ve spent some time in Florida, and a lot of these songs sound as though you, too, were sentenced to spend time in Florida at some point in your life. Was there a formative Floridian experience for you?

ID: After living on the West coast for a number of years, you moved to Des Moines, Iowa. What inspired you to return to the Midwest?

JD: It wasn’t exactly a return — I mean, I lived in Indiana when I was an infant, but have no memories of that. Also, I never moved to Des Moines. I moved from California to Chicago, and then to Grinnell, Iowa; from there to Colo, Iowa, which is in northeast Story County, and from there to Ames, which is west Story County. I moved to Iowa to be with my girlfriend, who is now my wife.

ID: What is your relationship to narrative?

JD: I am its humble & awestruck servant.

ID: Tallahassee has a tale to tell — can you summarize the story so far, in a paragraph that is more forthright than the one on your website?

JD: More forthright! What what! I am not a great believer in clarification, it takes all the fun out of stories. When I was a young science fiction fanatic I got so angry at blurbs on the back of the book that’d give away key points in the story: how much more fun to just have hints & shadings of the stuff that lay inside! The story is about a great moment within a loving relationship when the depth of things becomes tremendously, stinkingly clear. At which point the two main characters, and me, all sit down for a drink.

ID: How much do you know about your characters on Tallahassee? Do you know how it will turn out for them?

JD: O yes it already ended, in 1994, with a song called Alpha Omega — as the probability of divorce approaches 100%, the man wakes up one morning to find his beloved vanished. She has left a note on scented stationary. We don’t get to hear what it says. He heats himself up a can of boiled peanuts and eats them. It’s not even 8:00 a.m. yet. Our man has had some sad mornings but this is one of the saddest yet. And that’s the end.

ID: What does coastal/peninsulic energy have to do with the love affair of this couple?

JD: This is a great question, but one I’m unsure how to answer — I mean, clearly & obviously that energy feeds into what they’re up to, but I don’t know how else to put it. You can smell salt when they dance.

ID: How does the larger world enter into it? or does it?

JD: They avoid it, but of course you can’t avoid it entirely: they have to go down to the store for drinks & so forth. There’s a b-side called “New Chevrolet in Flames” that explains their playfully hostile attitude toward normalcy.

ID: What are your favorite things to do outside of music?

JD: Cook for my wife, listen to music, watch reruns of “Law and Order,” play with animals.

ID: Listening to anything good these days that we should know about?

JD: I’m really into Enon right now, and Rebecca Pearcy — and, as I said earlier, organ music. The new Nick Cave is awfully good. I just heard Dump’s “A Grown-Ass Man” and it has the best cover of Thin Lizzy’s “Cowboy Song” I’ve ever heard, which is saying something. There’s a metalcore band with the terrible name “lickgoldensky” whose album is just fantastic. I am forever listening to my favorite band, Lifter Puller. Lots of free jazz. A really really great band from England called Mister Lee. Some Peanut Butter Wolf stuff, as always, and Planet Asia. Bruckner. I could go on but that’s the top of it, anyhow.

ID: What has it meant to you to be indie?

JD: I don’t know how to answer this question.

ID: Do you have any advice for someone thinking of following in your footsteps and becoming an independent musician?

JD: Yes: don’t think about “becoming an independent musician”! Think about writing good songs. Face the other questions as they arise. Overthinking the question of independence = taking all the fun out of it, and since the fun is the whole point of it in the first place, that’s counterproductive.

Not that there isn’t something to be said for being counterproductive.

ID: Thanks for being counterproductive with us.

You can find out more about The Mountain Goats at at mountain-goats.com, and more about the latest release “Tallahassee” at this site, which includes a fabulous interactive floorplan of the home complete with many surprises.