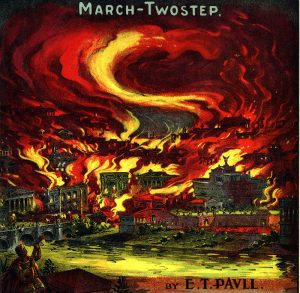 It was the best of times, it was the worst of times, it was pop music in 2011.  In the larger world, there were eruptions of populist sentiment accompanied by chants and machine gun fire, depending on what part of the world you experienced “spring” in that year.  Arab Spring rolled through the Middle East and Occupy Wall Street took up residence in Zuccotti Park in NYC that Fall.  This year, much of the same sentiment has returned with the Bernie Sanders campaign movement. What this has to do with music, I haven’t a clue, but something, maybe.

This show did not feature a lot of big tunes.  It was more an amalgamation of disparate tunes by various artists doing individual things on their own.  Electro pop is still big, and there are a few straight up rock tunes such as Dum Dum Girls “You Get Me High” and Barbara Panther’s “Your Empire Is Burning,” which gave us this week’s post title…

Top tunes for me that year were Cassettes Won’t Listen’s “Perfect Day,” which is a perfect pop song as I’m sure others have said before.  Favorite throwback track: Adventure’s “Feels Like Heaven” which seems almost assuredly to be a Psychedelic Furs cover only it’s not.  Best political song by a 90s artist: “Senator” by Stephen Malkmus and the Jicks.  We had to edit “blow” but it still works — people get the idea.

Read on for the full playlist.  As always, not all songs are from the year indicated.

* I heard Pumped Up Kicks everywhere that summer and for at least a year after.  Could it be its eerie resemblance to the Drew Carey Show theme song?

** In honor of Heifer weekend here in town, when the cows stroll down Main Street and visitors partake of public interest literature and displays about agriculture.