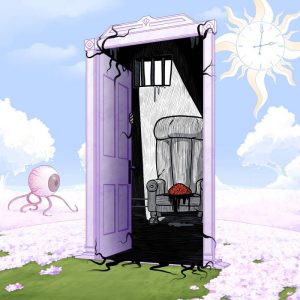 It begins with choral keyboards toning, toning, then space music breaks in, skittering atop these long chords. There’s a surge of interplanetary communication noise or maybe that’s intended to be solar wind.

And that’s the intro. We’re floating in space.

We are discussing here the new album, Untold Stories by Bloom.exe, a person residing in Toronto but coming from “elsewhere.” His music incorporates pop/rock/punk/noise/spoken word elements but builds it out of a wide variety of inputs from written texts (by the artist), spoken, sung, and shouted as well as sounds, found, created, and manipulated, layers and layers of sound interacting with words and ideas, themes raised and then left behind like scenes out the window of a car. He may or may not be an executable, but his work is so theatrical, emotional, and individual that you can’t find a category to hold it.

The first really declamatory track is “Repetition, Repetition” representing more than one person’s frustration with the world as it is right now, i.e., repetitious on so many levels.

There are hilarious lines: “I’m on the carousel of wealth!,” which are only ruefully funny because more than likely if you’re reading this, you’ve been there. Also a well deserved swipe at the “Boomers” and their forebears, “the elders of the ball and chain.”

“consciousness is a blessing and a burden”

I hear you brother!

Having survived “Repetition, Repetition” with consciousness all ajangle, we’re ready for some free-floating experimental sonicism, the insistent thrumming of guitars reawakening tribal consciousness, for we are all tribal at our core, aren’t we? Ironically, this track is called “Victoria, Pt. 2” which is not about Queen Victoria, but evokes her none the same.

Many of Bloom.exe’s tracks incorporate spoken word, deeply personal but still relatable. In “Code B,” he manages to create a complex metaphor involving some unnamed malfunctioning machine representing our whole freaking system, which is, as we know, deeply messed up. “Let’s put it through Code B again.” And so we do. Will it work this time? An echoing trumpet blows commentary. It’s almost free of the machine.

Or is it? Discordance moves in, dissonance, difference. What is harmony? Is it even possible in a diverse world? And we’re back into repetition…

Then things get really crazy and we wonder about our sanity and that of our host and guide through this strange universe. Still, it’s all good, isn’t it?

“Child At Heart” is the perfect sarcastic capper to Untold Stories, keeping the razor sharp while giving us the light carefree happy song he knows is needed here. In the spirit of Elvis Costello and his ilk, the points that need to be made are made while keeping us just this side of the yawning abyss.

With free-wheeling experimentation in every facet of songwriting and arranging of this at times epic construction, Bloom.exe‘s Untold Stories is an experience as much as an album — decidedly arty but still accessible to fans of experimental music. Listen all the way through for the full effect. If you can only do one track, I recommend “Repetition, Repetition,” which is the record’s manifesto as well as a true cry in the wilderness.