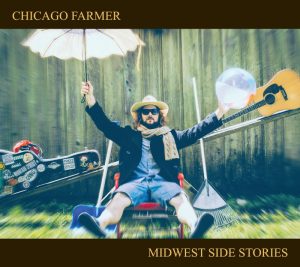 We first happened upon this record, Midwest Side Stories by Chicago Farmer, about a month before the presidential elections.  Being Northeasterners, we were a little nervous when we realized that this was basically folk music about “deplorables.” Nowhere on the record will you find the word deplorable, but given that these are songs about mostly white people from the midwest — who else could he be talking about?

Of course it’s nowhere near that simple.  According to the liner notes, Midwest Side Stories is about “hope, depression, job loss, meth, skateboards, a divided nation, used cars, the late shift, farms, factories, the destruction of our environment, and still being around to sing about it.”  This is a literal description — the songs are about those things, in that order.  But the funny thing is, after a listen or two, you’re pretty sure you’re listening to the new Woody Guthrie, and that’s another hint.  If this record is any indication, we’re in different but familiar times — the kind of times our grandparents and great grandparents knew.  Trouble is, half the country is oblivious.

Chicago Farmer is here to end our ignorance and let us know what’s going on on the other side of town.  It isn’t always pretty and everyone is broke, but here and there, you’ll find glimpses of sunshine through the dark clouds of crappy economic conditions.  He’s almost cheerful about it at times, but he never lets you forget the struggle that a lot of people and not just white midwesterners are going through right now.  If you had illusions about rural life as a some kind of bucolic Disney panorama, these songs will disabuse you of them.

Want farms?  How about factory farms, increasingly the only kind there are (“Farms and Factories”).  Want to understand class issues?  Start by listening, and whatever you do, “get your story straight” (“Two Sides of the Story”).  There’s “Skateboard Song” about the lousy way a lot of cops and adults treat kids on skateboards. And finally “I’m Still Here” which is a timely reminder of what the media seem to have forgotten, if in fact they ever knew — that there’s a lot of suffering going on in America and some of the people doing it are white.

Cody Diekhoff, the singer/songwriter responsible for this beautiful mess, sounds a bit like Freedy Johnston or even Jimmie Dale Gilmore of the Flatlanders — there’s a vibrato suggestive of what they used to call that high and lonesome sound although you don’t usually hear it applied to songs about meth-cooking neighbors or new used cars.  His band has the ring of authenticity, fully rocking when called for, without a trace of affectation; the record as a whole is like that too.  It’s just music, and production means getting it recorded and out to digital so people can listen to it and start making a better world.  Which is what I like about it.

Another thing I like about it is that after two listens I can sing the choruses. There’s something reassuring about that.

Chicago Farmer says music changed his life and that it can change the world too — he says his town’s new elementary school proves it.  But that’s another story.  Want to feel less like an elitist snob?  Check out Midwest Side Stories.