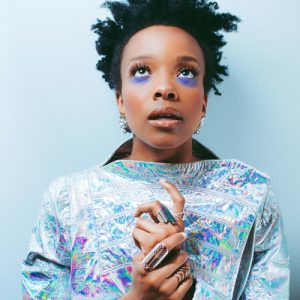 Poetry and hip hop are an obvious pair – the rapper and her rhymes — but while most rappers are poets in their own way, not as many poets are rappers. Jamila Woods has the skills to do both. She’s a recognized poet in the tradition of Lucille Clifton and Gwendolyn Brooks, and now has a critically acclaimed album, HEAVN, to add to her resume.  Although this is not her first foray into music (she also worked with Chance the Rapper on several songs and recorded with her band M&O), HEAVN definitely makes a statement that Jamila Woods is here.

HEAVN was an important work for Woods, so important that she felt the need to release it for free on SoundCloud to make sure real people heard it and not just music reviewers and fans with money. On HEAVN, she addresses one theme in particular — growing up as a black girl in the city, specifically the city of Chicago where Woods has lived most of her life. Teaming up with Chance the Rapper and his cohort Donnie Trumpet, also from Chicago, she creates a tapestry of jazzy licks, hip hop beats, and lush background vocals over which she takes us on a poetic odyssey through her Chicago girlhood.

“Bubbles,” the lead off track, is appropriately cheerful on the surface, but the “black girl” in the vocal lives in a bubble “floating quietly out of trouble,” not knowing “how tall” she really is. “BLK Girl Soldier” provides an overt contrast with a nod to the female activists of the Black Lives Matter movement, putting them in context with Rosa Parks, Ella Fitzgerald, Sojourner Truth, and the recently eulogized Harriet Tubman. These black girls “scare the government” but as Woods points out, the government “doesn’t understand.”

As a former black girl in her own right, Woods grapples with issues across the spectrum of ordinary life, from whether or not to use beauty products to achieve conventional (white) standards of beauty to how to keep your head up when the world seems to be crumbling around you. Chicago is a rough city with an exploding murder rate, but despite its problems, the city is her HEAVN. Woods lets Maureen Dowd say it straight out:

Although Jamila makes it clear she’s sticking around despite the temptation to bail on her troubled city (“LSD”), she later tells us that just because she was born here doesn’t mean she’s “from here” (“Way Up”). There’s a little Sun Ra in Woods’ musical spirituality, and a sense that she truly is “an alien from inner space,” but one who, boddhisattva-like, can’t quite disengage from the real world. Jamila Woods clearly cares, and through her work, she makes it possible for her audience to care too in ways they might not have thought of on their own.

Jamila is pronouced Juh-mee-lah.  Learn more at her web site.