Another week, another episode of Bubble Wrap. As winter waffles to a close–some days cold and snowy, some days balmy and 65–we decided to stay in the present tense this week and concentrate on the now. Why is this always a good idea? Whatever the reason, it translated into a some very new music such as Finnish duo Tuomo and Markus’ “Over The Rooftops” and Tinariwen with a tribal dance track called “Ténéré Tàqqàl” (from Mali).  In fact, we went all around the world this week as you will see. 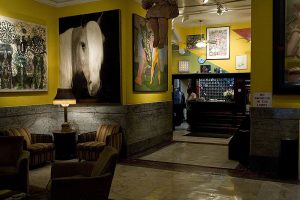 But first, there were departed pop stars to commemorate. This week, it was Al Jarreau who many people will not remember as the artist responsible for Breaking Away in the 1980s, a Grammy winning record full of fun but fluffy pop songs. The one everyone remembers is “On The Roof” but we didn’t play that one. We played “Boogie Down,” instead, a very uncharacteristic but still enjoyable Al Jarreau song.

In another commemorative moment, we were reminded by a caller that Stanley Bard, the godfather of the Chelsea Hotel in Manhattan, died this last week. He was in his 80s and had already been ousted from the hotel by profit seeking family and a corporation, but he will be remembered by many artists, famous as well as lesser known, for his kindness to them through the years. We played “Chelsea Morning” by Joni Mitchell to encapsulate the magic of the Chelsea at an earlier time.

This week’s oldie: “Spirits In The Material World” by the Police

Most memorable tracks: “Music for Four Pianos” No. 4 by Bill LePage (Brooklyn composer).  “Tereta” (Nostalgia) by Mulato Astatke, an Ethiopian jazz artist from the 1960s and early 1970s.

Bill LePage – Music For Four Pianos No. 4
The Vryll Society – Sacred Flight
Tuomo and Marcus – Over The Rooftops
Al Jarreau – Boogie Down
Mary Jane Girls – In My House (12″)