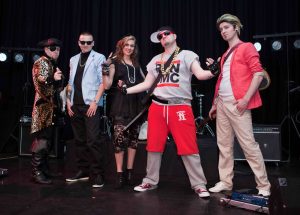 One of the fun things about surveying music by year after the fact is seeing which artists carried on to greater fame.  In some cases, they are not who you’d expect.  When I first heard Calvin Harris’ It Was Acceptable In The Eighties, I thought it was a silly song.  Then I happened to be chatting with a group of ladies who were all born in the 80s, and wouldn’t you know, they all knew the song.  Of course, they thought it was silly too, but what is more amazing is that Calvin Harris, the auteur responsible, went on to become HUGE in the dance world, headlining Coachella this year.  I shake my head, but then again, I still enjoy the silliness of the song.

Other standouts of 2007 were None Shall Pass by Aesop Rock.  Favorite line:  I’m trying to help….  Also, D.A.N.C.E. by Justice with its euro-adorable homage to MJ.  There was This Lamb Sells Condos by Final Fantasy, which had just enough edge to make the classically-tinged piano jazz of the chorus not just acceptable but great.  Rounding out my top tracks of the year were Yoko Ono’s Toy Boat (remixed) and The Aluminum Group’s Headphones.

There was not the volume of great tracks (maybe because I temporarily stopped looking) but what passed my way was memorable.  Here’s this week’s Bubble Wrap playlist — DJ CG’s tracks are not necessarily from 2007 nor are all of mine but a lot of them are…