As we struggled to figure out how to program our radio show, Bubble Wrap, we decided to focus on the indie music of the 2000s, starting with the first year for which I had a lot of music, which was 2004.  To put 2004 in context, it was the fourth freaking year of the Bush administration, Kerry (yaaaawn) was running for president, and some of us were not in the best moods.  The music, oddly enough, reflects that ennui.  We weren’t so much bored as beaten, no options, no hope for change…

Bush won that election, needless to say.  Musically, we got Another Morning With Kathleen, a reminder that The Revolution Starts Now, and the gentle rejoinder, “It’s All Good.”  The Magnetic Fields put out the I record that year, one of their all-time best (we played I Don’t Believe You).  Arcade Fire gave us Neighborhood #3. I discovered The Playwrights.  It wasn’t so bad.  Read on for specifics: 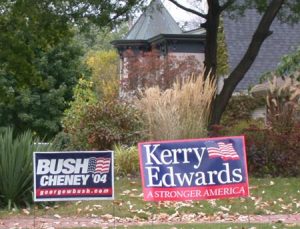 Please note:  We are not strict about years.  In any given show, we may play songs from a variety of years.  Most of the songs in this show were from 2004, but by no means all.