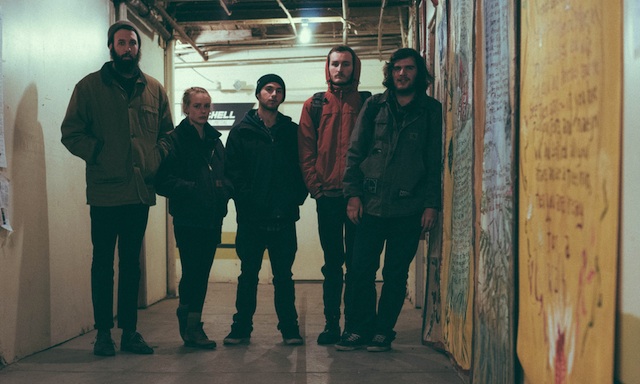 The beauty of the Future as a venue is its obscurity and its diversity.  The space is small, intimate, so intimate that sometimes it freaks you out a little.  Bands routinely try to chat up the audience just to break the weird tension that arises when you’re setting up with people four feet away, just sitting there, silently staring at you.  But that’s part of its charm.  Performers are so close, they barely need amplification.

On a recent Saturday night we were treated to a bunch of good local bands there, including Ava Marie from Poultney and Wooly Mar from Brattleboro.  Cal, also a Bratt local performed amazing industrial sound collage under the moniker of Peasants.  Azfarat filled out the bill.

Ava Marie gave an intriguing performance, with original songs and a serious lead guitarist.  They are on the indie folk side of things, with the sad, lonely sound that bands who come from places like Poultney sometimes have.  Equipment posed an issue (the co-vocalist was pretty much inaudible throughout the set) but somehow they rocked through it, and it was fun to hear a band with guitars play moody, melodic music in a “club.”  I’d see them again.

Wooly Mar/Maria wore white before Memorial Day, but her dress was ivory, not pure white, and she had a string of lights under it, giving her the otherworldly aura we’ve come to expect.  After coaxing a half dozen people to “bob around awkwardly” at the front of the room, she launched into her set, performing many of the songs she’s been playing this year, as well as a new one, which was fun to hear.  Wooly Mar has a CD (finally) and many people bought it at the show.  We got a copy and although it’s a year old and “a bit different from what she’s doing now,” as Maria was quick to explain, it’s a lovely record in its own right, taking you into a world of her own weaving with sinuous vocals intertwining the beats and pieces that underly all of Wooly Mar’s assemblages.  Catch her while you can…

Peasants, AKA Cal, came out looking scary and tough with his tattoos and shaved head, but despite the barrage of industrial ambience that he churned out of his box of beats, he ended with a smile.  Apparently he tried guitar for a while but feels “much more comfortable” with electronics.  He’s good too.  I could see him doing this in a bigger venue and entrancing the black-clad set.

Fast forward a couple weeks and we’re back at the Future, this time for a largely folk show, featuring Eric + Erica of North Carolina and Sam Moss of Brattleboro.  Anneke, also of Brattleboro, led off with her eclectic group of songs, some written by friends and admirees, some by Anneke.  She has a casual air that suits her material and provided the perfect warm-up for the bands that followed.

Some bands get your attention because you know you’ve heard whatever it is they’re doing before and you just can’t remember where.  That would not be Sam Moss.  Sam Moss has a unique sensibility that plays through everything he does, from guitar style to vocals to songwriting.  You notice because you haven’t heard anything like him before, and in the folk world, that’s a good thing.  His buddy, also a guitarist and a songwriter in his own right, traded songs and vocals, providing a nice counterbalance to the unconventional Moss.  Although they claim to be a one-off as a duo, I wouldn’t be surprised or sorry to see them again.

Eric + Erica are also a duo, he on drums and vocals, she on vocals and autoharp (with effect units, no less).  You would not think that drums and autoharp would be a promising combo but they are, at least the way Eric and Erica play them.  Without the bite of guitar, the autoharp is capable of a shimmering chorus effect that gives depth to the overall sound.  Eric is a solid drummer whose playing really pops, which is perhaps what makes this a pop band at heart.  They like the pop music but they write like folkies, and it’s melds like that that make music fun.  So hearts for Eric + Erica and thanks for stopping by.

Rush Awesome, who closed the show, is the sound project of Willie Gussin, a founding member of the Future Collective and an artist as well.  His performance involved a string of old analog cassette decks cabled together with short sound loops on each one.  Somehow all the sounds were synthesized from source notes played by Willie (or is it Mr. Awesome) on a keyboard attached to the array.  It is hard to describe what that sounded like — loud, electronic, a bit skronky at times, and surprisingly unbeat-driven.  It’s nice to hear non-beat music once in a while.  In this case, it probably couldn’t be described as music per se, since it didn’t really have any of the elements that comprise music as it’s typically construed.  But it was interesting to hear, and had it been earlier, I could have listened to more.