In January of 2002, we had the chance to interview Manda Rin from the band Bis, which later morphed into Data Panik. Manda continues with music and art to this day.

IndieDisco is delighted to share our recent interview with Manda (Manda Rin) of the Scottish pop band Bis. Having recently gone indie again, following the demise of their American label Grand Royal, we thought the time had come to check back in with them. Their current release Return To Central is on spinART Records.

IndieDisco: We love your new album Return to Central. What does the title mean, if anything?

Manda: I suppose it’s like returning to our roots and our original way of thinking. No compromising whatsoever, just making the kind of music that we want. Selfish – but has worked the best in the past. 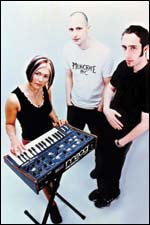 ID: Obviously, all of us are sad that Grand Royal is no more. But was it a something of a relief to be able to record your new record without the semi-major label oversight?

M:Yes, there were many problems with the GR and Capitol relationship and the bands got caught in the middle all the time. I left the label thinking that it was the best thing for Bis and that we could actually sell more records on a smaller, better co-ordinated label. We’ll see!

ID: The new music has something of a post-punk 80s feel to it, as opposed to the earlier punkier sound. Where do you feel you are musically at this point?

M: I don’t really know where we are which is maybe a good thing. I definitely think that we’ve entered a more electro territory verging on techno at times but we have never lost of pop edge with catchy melodies. It would be silly for all our albums to sound the same so I’m pleased that we have moved on.

ID: Amanda, we have always loved your singing style, old and new. Then we heard that you had singing lessons, much as Stephen Malkmus did a few years ago. Do you feel that vocal training was worth it?

M: I don’t have them anymore but the experience was great. Firstly it’s really enjoyable and helped a lot with my confidence. I just feel that I can offer to do more, harmonies and stuff especially. I enjoy singing now and although I can be pretty rough live at times I know that I can do what I can to make myself proud. Corin Tucker of Sleater-Kinney had singing lessons too and that’s where the idea came from. If anything it helps to control your voice and not lose it on tour, singing softer helps that too.

ID: You once told us that we could be teen-c, even if we were 40 years old. Now that you’re so much older than 19, do you think that you’re still teen-c? What does teen-c mean to you now?

M: I think that it’s a frame of mind that very much exists no matter what age you are. I’m now 24 but I don’t think that I act like most 24 year olds. I see people that I used to go to school with and they are dressed and opinionated very differently from myself. I don’t like conforming to others and that is something that I’ve never compromised on.

ID: The state of the world today seems to us worse than ever. Since your music always seemed to us to have political overtones, how do you guys feel about world affairs today, and have your feelings on this matter affected your music at all?

M: It may not have affected the music but it certainly affects the way that we’re thinking, the lyrics and our attitude to life. You’re right that the world is really fucked up just now, and it just makes me really grateful for all the opportunities that I’ve had in my lifetime. It’s really depressing to hear about women in other countries who are not even allowed to be educated, something that I never had to think about when I was growing up.

ID: We have in the past acquired Bis candy, Bis stickers, Bis badges, and Bis beer opener/closers. Does Bis have any interesting new promo items for their fans?

M: Last tour in the US we had temporary tattoos, so that was my latest idea. I don’t know what’s next. I’ll need to think of it – something I do enjoy! Cheap and useful is best!

ID: What kind of music do you guys enjoy most these days? Any favorite bands, old or new?

M: I really like the Faint’s new album. I wasn’t so sure of them at first, but I love that album. I am also listening to Playgroup, Miss Kitten and the Hacker, Le Tigre, Peaches, the Hives (great band!), Destiny’s Child and Adult.

ID: How do you approach song-writing? Are all of you partners in the process? How does that work?

M: It has changed over the years. In the beginning we used to write while rehearsing in a ‘jamming’ kind of way, now we write and we record on the computer and it gives us much more flexibility in what we’re doing. We all add different things to Bis but we always need an initial idea to work on first.

ID: Is the switch to a live drummer a permanent move for the band?

M: I’m not too sure, if we can afford it! I love the sound and it is essential for the new album to sound good, so we’ll see how it goes. he’s not part of the band though, just hired help in a way although he is a lifelong friend so he’s no stranger and loves Bis.

ID: Congratulations, Manda, on your recent marriage. Has marriage changed your career plans at all?

M: Thank you! It hasn’t changed me. He married me for the way I am and it would be silly to change then. He does give me a lot of confidence and encouragement so maybe he’s helped in a positive way – we have been also writing music together and released a single on Damaged Goods under the name of the Kitchen. We plan to do more stuff too.

ID: We recently read a book about Findhorn. In that book, the author meets a faun (yes, a faun) who says to him, right off, “Why are humans so stupid?” Since we often ask that ourselves, we wondered if you ever do, and if so, why?

M: Some people act very stupid and with all these world events going on, I have asked myself that many times.

ID: Yo La Tengo, Guided by Voices, and Pavement all stayed indie to the last. Do you think it’s better to be indie or would you like to sign with a major one day?

M: Well we were on a major in Japan and GR was connected to Capitol so we practically were. I wouldn’t say that it’s much different to be honest. You can get assholes at indie labels too – they’re not perfect just because they’re indie labels. You just need a label where the person that you deal with loves your band, knows what you’re talking about and understands the reasons why you want or don’t want to do certain things.

ID: The Glasgow music scene appears to be thriving still, with bands like Mogwai, Delgados, Belle and Sebastian, as well as yourselves, achieving critical acclaim. Is it still fun to be from Glasgow? What goes on?

M: It is great being from Glasgow and it’s always nice coming home especially to see that fellow bands are doing well. It’s a nice little city – lot’s of music lovers and good clubs, bars and shops.

ID: What’s next for Bis? Can we expect a new record next year? Will you tour the States again sometime in 2002?

M: We were talking about it but I have no idea at the moment. The album will need to be promoted in the UK too, but we’ll need to wait and see what the plan is.

ID: Is there anything you’d like to answer that no one ever asks?

M: Will you please take this cheque for £1million?

Thanks for the interview and good luck!